Holi, the Festival of Colors in New Zealand: HOLI होली festival is celebrated on full moon day (Purnima) of Falgun month as per Indian calendar. This is a two days festival, first day evening is burning of Holika the devil and second day is the color festival. Thus this festival is also known as Festival of Colours.

In India, gathering of poets reciting comedy and satire are popular. It is known as Hasya Kavi Sammelan हास्य कवि सम्मेलन

FAAG UTSAV: The singing of traditional and folk songs is celebrated during the Holi and Falgun month. The celebrations of singing these songs is “Faag Utsav”. It is more popular northern and eastern states in India. Many cultural programs are organised across New Zealand to celebrate Faag. Colorful Flowers are used to play instead of colors during Faag celebrations.

Here are few programs organized to celebrate Festival of Color:

Faag, Holi and Holika Dahan होलिका दहन (Similar to Bonfire) is organized in most of the temples across New Zealand. click here for list of temples in New Zealand 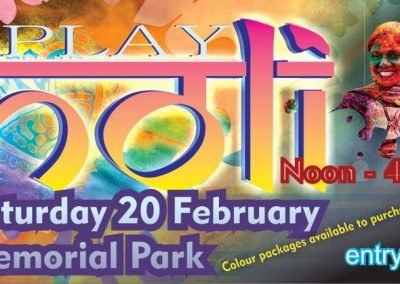